My son turned 16 and thought, what better way than to take him on a fishing trip in Northern Ontario.  After some discussions with Mike Borger (Canada Fishing Guide), he had me convinced to spend the extra time and money on a fly-in trip. Boy was Mike right!

White River Air is located just North of the town that was home to the real Winnie the Pooh - White River.  Home base is located on Tukanee Lake, not far from White River (6-8 minute drive away if you are staying in White River).  Upon arrival, we were greeted by Brandy and given the run-down of the trip and timing.  After unloading our equipment and food at the dock, the guys loaded our single prop Beaver.  Our flight was amazing, calm waters and smooth sailing so to speak when cresting the tree tops. The view of Northern Ontario from that Beaver gave new meaning to just how vast the province is.  Fully of tea-stained lakes, streams, bogs and lush green untouched forests and aquatic vegetation. 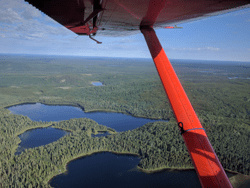 From up high, the scenery was breathtaking, particularly for someone who had never flown in Northern Ontario.  With the outpost in sight, our pilot pulled back on the throttle as we decended to Lake Hambleton.  As we flew over the lake, I made a mental note of the various changes in depth and possible fishing hotspots on the lake. Surprisingly, for the number of people that come to Hambleton Lake each year, there is not much information out there about where to fish. Most people rely on the pilots for their intel, but my mission was two fold.  First, getting my son on the water for some quality father-son time, second was to test an new fishing app I have been developing for the past 2 years called FISHBUOY. If you want to see our hotspots where we caught fish plus water, weather, moon phase, and primary bait color, download the free app visit www.fishbuoy.com. 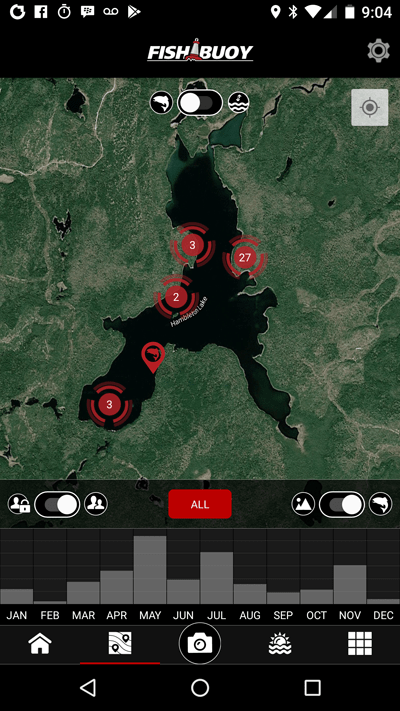 The outpost itself had three lund 15ft boats with 9.9 Yamaha outboards.  All the boats had small leaks so bringing a pair of rubber boots made that easy to deal with. We never had a problem with starting the engine and plenty of fuel was supplied for both the boats, generator and water pump.  Yes, the outpost, which had four bunk beds, a kitchen with fridge, dining area and a shower with hot water, also had electricity for lights.  The pump located near the waters edge was used to pump water from the lake to barrels that provided water pressure and water for the shower and sinks.  NOTE: you must prime the water pump so make sure the pilot shows you how.

The washroom was an outhouse situated not far from the building, but far enough back.  It had a screen to reduce mosquito's.  Overall, Hambleton's outpost was well equiped. 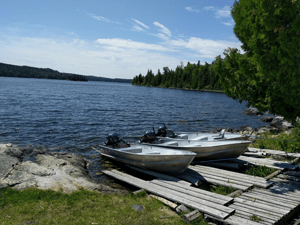 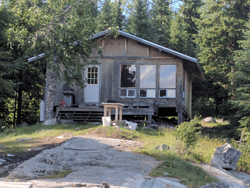 The lake is actually not as tea-stained as some of the lakes we had flown over.  In fact, I would place the water color similar to Bay of Quinte (minus the polyps bloom you see in the spring).  Water temps were in the low-to-mid 70's.  The outpost is situated pretty much in the center of the west shore of the lake, which makes it nice to access both ends of the lake quickly.  The north (top) part of the lake is shallow with a sandy mud base.  There is a small channel leading to a shallow back bay that we never had time to investigate.  Though the northern portion of the lake looked inviting for Pike, we did not see any.  However, I would imagine in early spring this would be a great place to target Pike post-spawn.  The southern most reach of the lake was very promising with huge individual rock bolders and rocky outcrops that extended well in to the lake from the shoreline.  Be careful, as they are not obvious!  These structures were ideal for Pike and Walleye and we managed to land a number of fish at this end of the lake.  Noteworthy is a small, scenic water fall - but be aware, there are huge leeches swimming around that occasionally latched on, as my son once found out.   To the east, there is a single arm with a very shallow, muddy/silt base.  Some aquatic vegatation and rocky shores would make this a great place to target post-spawning Pike as well.  We did not fish it simply because it was too shallow.  However, where the main lake meets the east arm, you will find a rocky outcrop - this held many walleye.  Suggest you spend some time fishing the outcrop, in addition to the inner bays that connect.  This is where we had our best luck by far.  With a dominant south-south-east wind, this shoreline hosted bait and schools of walleye, likely due to the shoreline distrubance caused from the wind.  As most fishermen know, fishing the rough side of the lake is generally most productive and this was certainly the case during our stay.

Lake Hambleton also has an island not far from the outpost.  This island has a rocky outcrop (south-west corner) that extends halfway to the west shoreline.  We mostly fished the Southern and Western portions of the island and took many Northerns off the Southeast corner of the island as well. 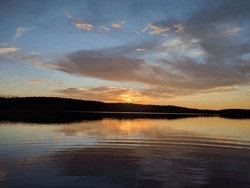 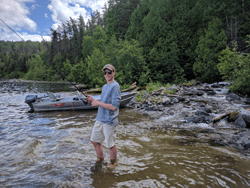 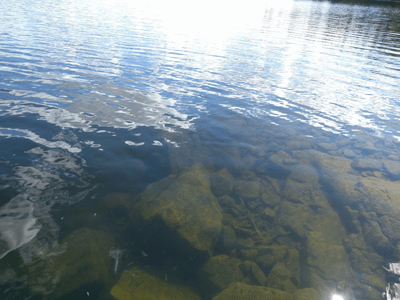 We had read information about the lake highlighting Walleye as the dominant species followed by North Pike.  So, as any good walleye fishermen would do, I loaded up on a variety of jigs, various sizes and a multitude of colors with chartreuse being the dominant color.  Supplemental to this, we stocked up on large Len Thomson spoons such as the yellow-red five of diamonds, chartreuse-orange five of diamonds, and Mepps Cyclops spoons and inline spinners.  By far, the gold Mepps Cyclops caught more pike than any other bait we casted, and from the photos in this article, you can see we had a full arsenal to select from.  For walleye, the dominant bait was.... a jig tipped with a minnow - that's right a minnow!  Though we caught plenty of fish on jigs tipped with worms (white Mister Twister tail, black dots), we consistently caught more fish with minnows. During shore lunches, we even put a minnow under a float right off the dock and caught a number of walleye and pike. 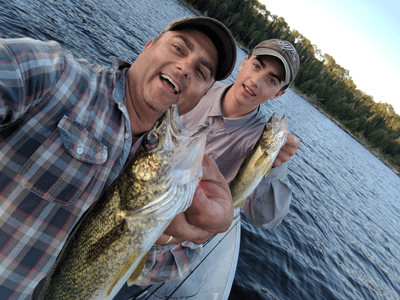 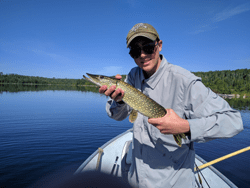 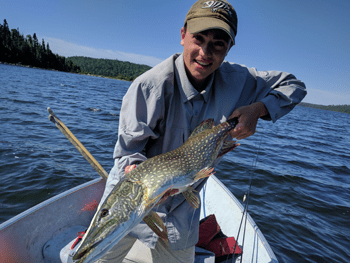 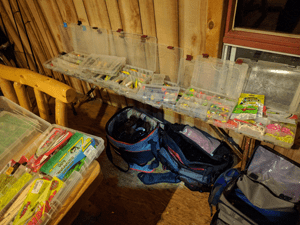 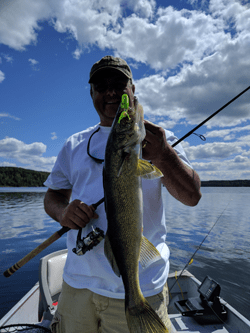 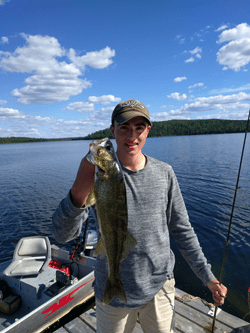 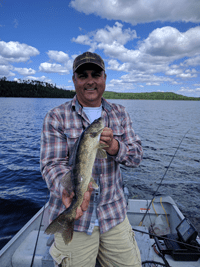 Why minnows?  We learned from our pilot that the lake was experiencing it's annual Mayfly hatch - and it was in full force right when we where there.  We saw many fish surfacing and upon closer investigation, and confirmation, whitefish were coming to the surface to feed on the Mayflies.  But, this also meant the walleye were also feeding on them which was confirmed when cleaning fish for shore lunch. According to the pilot, during this time, you have a 1-2 day window of less-than-typical fishing on the lake. He was right however we countered the Mayfly hatch with live minnows we caught from our dock. This was a learning for me.  Always bring a minnow trap!

Overall, fishing was great, we hooked into numerous walleye in the 15"-18" range and a Northern Pike over 31".  We had many follows from Northern Pike that I would estimate in the 42" -45" range.  We had shore lunch everyday and to note, the island across from the outpost is a great place to relax, fish and enjoy your catch. 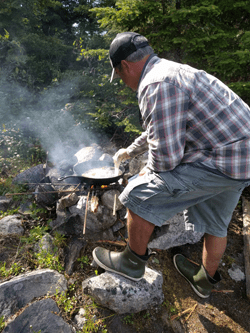 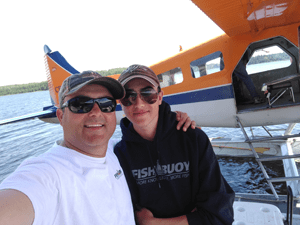 Overall, White River Air provided a wonderful and professional fly-in experience.  They provided a friendly service from booking to departure.  The facilities and equipment were all in full working order which made for a very comfortable stay.  And of course, the fish was amazing!  We will return soon.

I would highly recommend you contact White River Air as they have many other outposts to experience.